February 15, 2021
ChamberLegislative Update
The Georgia General Assembly completed day 16 of the 40-day legislative session on Thursday, February 11th. The House and Senate will reconvene on Tuesday, February 16th for legislative day 17. On Tuesday, the newest Adjournment Resolution, SR 82, was passed and outlines the schedule through March 1. Legislative Days 17-19 will be Tuesday, Wednesday, and Thursday of this week. The full schedule can be found here.
On Tuesday, HB 80, the supplemental budget, passed the Senate. The House and Senate passed it without going through a conference committee. The amended HB 80 was passed through the House and Senate on Thursday and was immediately sent to the Governor for his signature. Now work begins on the FY 2022 budget.
Bills of Interest:
Senate Bill 1 by Senator Dean Burke (R-Bainbridge) which would require companies with ERISA insurance plans to report healthcare data to the State’s all payer claims data base. This measure concerns many employers providing health insurance coverage to their employees. No vote has been taken yet.
Senate Bill 6 by Senator John Albers (R-Roswell) which requires a review and evaluation of state tax credits was overwhelmingly approved by the Senate is currently assigned to the House Ways and Means Committee.
House Bill 86 by Representative Ron Stephens (R-Savannah) would legalize sports betting sponsored by Representative Ron Stephens and supported by major league professional sports teams was recommitted to Economic Development and Tourism by the House Rules Committee.
Senate Bill 52 by Senator Bruce Thompson (R-District 14) grants a legal safe harbor for companies that experience a data breach if the companies have taken certain measures to reasonably protect the personal identifying information. This bill was assigned to the Senate Science and Technology Committee and was favorably reported by substitute on Tuesday, February 9.
House Bill 98 by Representative Eddie Lumsden (R-Armuchee) and SB 95 by Senator Frank Ginn (R-Danielsville) allow government entities to conduct meetings through teleconference. House Bill 98 was favorably reported by committee on Thursday February 11.
House Bill 112 by Representative Trey Kelley (R-Cedartown) extends the liability protection to businesses for COVID-19 claims for 1 year through July 14, 2022. This legislation passed the House 99-68.
House Bill 134, by Representative Victor Anderson (R-Cornelia) seeks to exclude meetings relating to cybersecurity contracting and planning from open meeting requirements. This bill was passed in the House on Wednesday, February 10, and has been referred to the Senate Science and Technology Committee.
House Bill 150 by Representative Bruce Williamson (R- Monroe) seeks to prohibit cities and counties from adopting restrictions on the type of fuel used in future development. The bill passed the House Energy, Utilities and Telecommunications Subcommittee on Wednesday, February 10. The companion bill, Senate Bill 102, by Senator John Kennedy (R-Macon) was assigned to the Senate committee on Regulated Industries and Utilities where it is expected to be heard this week.
House Bill 265, by Representative David Knight (R-Griffin) updates the Tax Code and passed the House 166-0. This bill has been referred to the Senate Finance Committee.
House Bill 306, by Representative Stan Gunter (R-Blairsville) would allow corporations to hold shareholders' meetings by means of remote communication. This bill is currently in the House Banks & Banking Committee.
House Resolution 11, by Representative Wes Cantrell (R-Woodstock) would create the House Study Committee on Innovative Ways to Maximize Global Talent in Georgia. This bill was favorably reported by the Small Business Development House Committee.

This weekly Legislative Update report is courtesy of the Regional Business Coalition of Metropolitan Atlanta (RBC), an organization of over a dozen of the largest and most active Chambers of Commerce throughout the metro Atlanta region. RBC member chambers represent over 15,000 member companies who employ millions of metro Atlanta residents. The RBC’s primary goal is to represent the interests of RBC Chamber members on regional public policy issues impacting our transportation, water and air quality and to advocate for solutions that improve metro Atlanta’s quality of life and economic vitality. 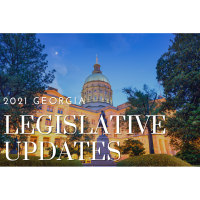